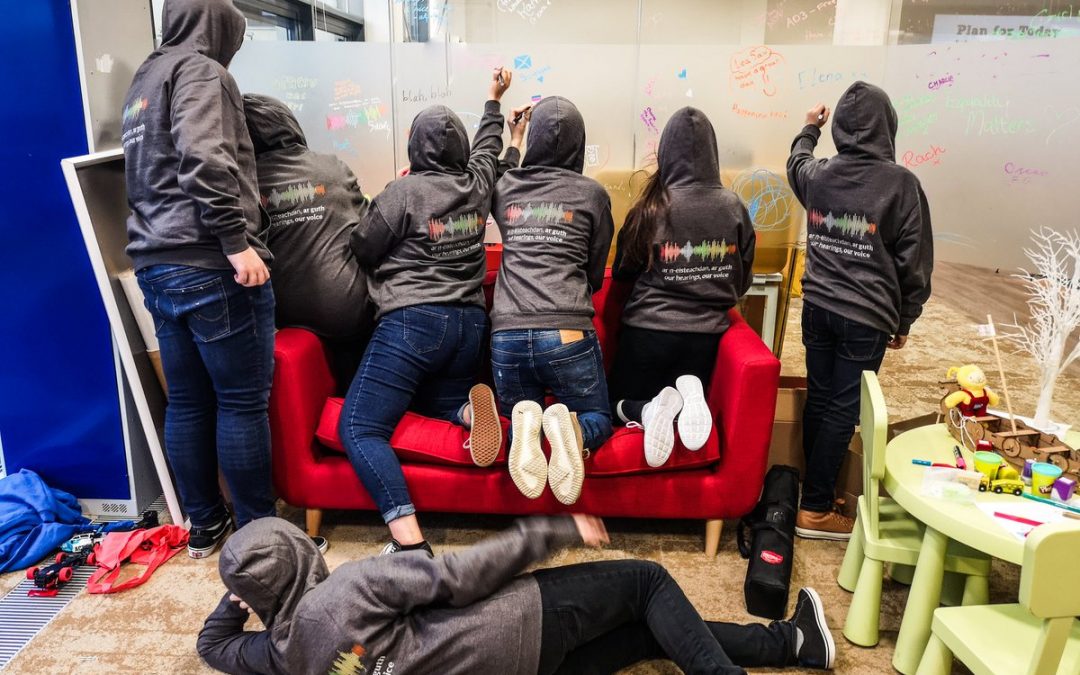 Our Hearings, Our Voice has recently launched its eye-catching logo.

Young people from OHOV were excited to see the final version of their logo at their latest meeting last month.

The young people had previously come up with ideas and designs for their logo and designer  Marie put the finishing touches to it.  The colourful soundwave is actually Our Hearings, Our Voice in Gaelic and English!

The final design incorporates elements from many of the young people’s designs however is based upon the idea of a slinky.  The board members felt the slinky represented what Our Hearings, Our Voice was all about – being connected, joined up and working together for movement and change.

To mark the launch, the board members received hoodies (or sweatshirts if they preferred) and water bottles with the logo on at their fourth event which was held on Saturday 8 June at the Children and Young People’s Commissioner’s Office in Edinburgh.

Jacqui Dunbar from OHOV said: “The young people had so many brilliant ideas for the logo. We could have come up with at least 10 amazing logos.  Sadly, they could only choose one and the designer did a fantastic job of supporting them to come to their final decision.

“I think it’s a fantastic logo and fits their brief of something colourful, inclusive and very unique.  The feedback from everyone so far has been really positive.”

Dylan Duff, one of the young advisors from OHOV said: “I’m absolutely loving the logo. It’s been great to see so many young people come together with a collective consensus to improve Children’s Hearings for the better.”

At the event the young people also took part in a session to choose their priorities for the year ahead.

Jacqui explained: “Since the first event back in November last year, we’ve been working with the young people to identify their areas for improvement in the Children’s Hearings System.  This was the first time we collated all of their views together and the young people spent time discussing what they feel needs to change and why.

“The board members will use this information to identify their top priorities and to develop their work plan for the coming year.  We are looking forward to working with the key partners to share these views and support them to take positive actions going forward.”

The next step is to create a website. This will be developed over the summer period and launched later this year.

In the meantime, the OHOV Team have welcomed a new Project Worker to the team. Catherine Harrison was an Information and Advocacy Officer working with the charity Quarriers in Falkirk.  She joined the team on Monday 1 July.